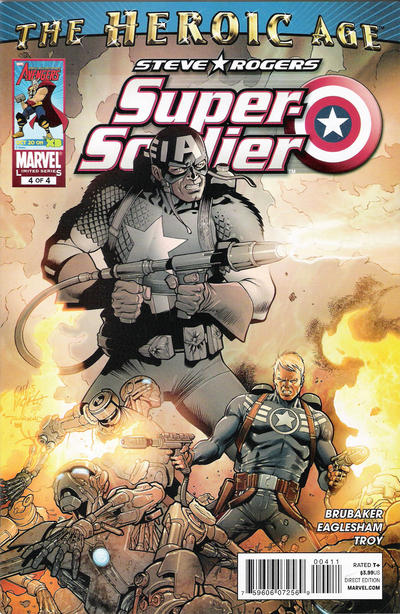 Caroline Pruett:
This issue marks the end of Ed Brubaker and Dale Eaglesham’s miniseries, but it hopefully won’t be Bru’s last
shot at solo Steve Rogers adventures. If Brubaker has a flaw as a superhero writer, it’s a tendency to drag out his arcs. The four-issue mini keeps that in check, and lets his balance of well-scripted action, romance, and a serious embrace of the goofier side of comic villainy (his Machinesmith is simultaneously awesome and ridiculous and creepy and did I mention awesome?). Eaglesham is, of course, the perfect guy to be drawing super soldiers, and creepy robot-men, and an excellent cat-Beast to boot. When they make this into a trade, it’ll be the perfect gift to give someone to show what Marvel comics are all about.
[8]

Jason Urbanciz:
Steve has his final confrontation with the Machinesmith in order to stop him from selling the super soldier serum to all takers. This was a fun little adventure, giving Steve something to do while he’s out of the main spotlight in Captain America right now. Dale Eaglesham was pretty much the perfect artist for this, I never really cottoned to his work on Fantastic Four, but this type of super-spy adventure is right in his wheel-house and Ed Brubaker has a better handle on writing Steve Rogers than anybody since Mark Waid. Hopefully, since this series set up at least one future storyline, we’ll see it pay off soon.
[7]

Jennifer Smith:
This is a serviceable conclusion to a miniseries whose primary strengths have been Dale Eaglesham’s beautiful art and Ed Brubaker’s understanding of Steve Rogers’ personality. Eaglesham really shines here, creating several pages of dynamic fight scenes that manage a level of logical clarity in storytelling that deserves commendation. He also draws a kick-ass cat Beast, which is not an easy task for most artists. Writing-wise, the issue falls a little flat, tying up loose ends a bit too quickly, but the twist and cliffhanger at the end of the issue make me eager for wherever Ed Brubaker’s writing of this character will take us next.
[7]