Jennifer Smith:
Anthology books can be hit or miss, but this issue hits on all levels. Greg Rucka opens the book with a fantastic, heartbreaking Steve Rogers story drawn by Michael Lark, a story that pushes every single one of my buttons and displays Steve’s compassion and sense of duty in the best example of show-don’t-tell I’ve seen in a comic in a long, long time. Then we get Sean McKeever and Mike Mayhew’s Justice and Firestar story, a gorgeous introduction to a three-part story about the former couple running into each other unexpectedly after time apart. The Lindsay Lohan photoreference for Firestar threw me off a bit, but McKeever’s ability to write emotionally true interactions between longtime friends (the former New Warriors, who feature in this story) and former lovers is unmatched, and Mayhew does a wonderful job with facial expressions. Finally, two sillier vignettes — a Paul Tobin and David Lopez two-pager about Jarvis, and a Jacob Chabot strip about an Avengers pie-eating contest — round out the book, balancing the heavy emotions of the first two stories with a dash of levity. Overall, it’s a fantastic book, and a must-read for Cap or New Warriors fans in particular.
[10] 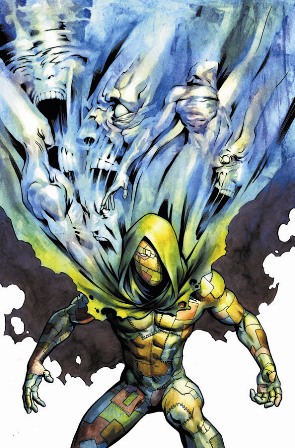 Dan Faust:
The first time I had ever heard of Ragman was in a Batman RPG way back in middle school — we’re talking over twenty years ago — and the idea that a guy ran around in a suit of rags fighting crime was the craziest and coolest thing I’d ever heard of (this was before Ragman was retconned into a mystical hero). I picked up Shadowpact solely because Ragman was in it (come for Ragman, stay for the talking chimp). So, when I heard about this one-shot, I made a mental note to pick it up; it doesn’t hurt that Christos Gage can write the ever-lovin’ hell out of comics. Rather than re-hash Rory Regan’s origin as the current Ragman, this one-shot looks at the origin of the Ragman suit and the previous owner, Rory’s father. The main thrust of the story is Rory’s need to know why his father seemingly turned his back on their Jewish heritage. Without giving too much away, I’ll say this, the issue ended with my favorite moral of all: you don’t need superpowers—or a magical soul-powered suit of rags—to be a hero. I would kill for more Ragman written by Gage and drawn by Stephen Segovia. This one-shot was not nearly enough.
[10]

Dan Faust:
I’m sure there are those who’ll call Boom! Studio’s new Darkwing Duck series “nostalgia porn.” I prefer to think of it as an incredibly funny, well-written series with amazingly beautiful art that’s (OH MY GOD!) something you wouldn’t be afraid to let your kids or younger siblings read. This series manages to capture the tone of the original Disney cartoon, although in a slightly less frenetic way — which is understandable, since static illustrations, no matter how good, can’t reproduce the movement of animation. Darkwing Duck was always a super-meta love letter to comic books and comic book superheroes, so it’s only fitting that his new comic would pay homage to/poke fun at recent comic stories (HINT: think Marvel’s “Dark Reign” and “Heroic Age”).
[10]

Chris Walsh:
I have to agree with Dan on all counts. This has been an absolute joy to read — both taking me back to the days when Darkwing Duck was one of my favorite things on TV, and just providing a fun, highly funny, all-ages comic book to read. I can’t know for sure how someone with no previous relationship with the Darkwing franchise would react, but I can’t see how anybody who is willing to give this comic a chance couldn’t find something to enjoy about it. Great art and great humor, with an incredible amount of gags and references to comic and superhero tropes. Sheer silly greatness.
[10]

Jeffery Simpson:
I’m not the target audience for a Punisher Max book, yet something in the back of my brain keeps making me dip my toe into the Punisher’s bloody violent waters every so often to see if maybe this time I find something that interests me. Enjoying the Punisher whenever he shows up in mainstream Marvel titles, his own titles tend to be too grim and gritty and a Max title takes that up to eleven. This is the kind of story where in a flashback the central character’s mother molests him as a teenager, gets pregnant, then mutilates his genitals before slitting her own throat. You know, a good old fashion family tale. If that sounds appealing then this book is for you. Though be warned for all the violence and gore most of it has nothing to do with the Punisher, who essentially book ends the comic, prompting and resolving the story without actually being involved in it.
[5]