Flashpoint: Lois Lane and the Resistance #3 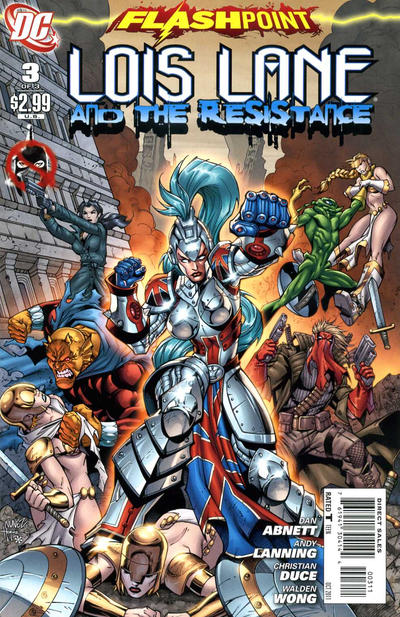 Jason Urbanciz:
This was bad comics, like really awful, pointless nonsense. I’m a big fan of Lois Lane and I got it simply to support any books she’s in, but come on, this was just stupid. Lois is trying to escort Britannia to her magic power suit through a warzone so she can be the super maguffin that kills all the bad guys I guess? But we know she’s not because all that’s happening elsewhere. Bad art, shoddy writing and just a pointless story. Also, this is the second comic in which Lois Lane (Spoiler!) dies in two weeks in the same cross-over. They should have just called Flashpoint “The Many Deaths of Lois Lane”.
[2]

Caroline Pruett:
You know how sometimes you pre-order the first issue of the tie-in to an event you know nothing about, because the name of a character you like is in the title? And then the first issue is decent so, even though you actually still have no idea what the event is about, you get the second issue? And then the second issue has nothing to do with the character that you originally bought it for? But you forget to cancel and have to buy the third issue anyway?

Lois actually does get a few good scenes before this comic is over, and I would have enjoyed the story of Britannia outside the context of an info dump in a comic that’s supposed to be about something else. Abnett and Lanning write a decent action-packed team book, as always, and the art by Christian Duce is quite solid. That said, this story has no reason that I know of to exist and outside the context of Flashpoint is essentially incomprehensible.
[3]